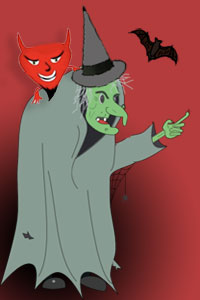 There are many misconceptions about Wicca floating around. This is more than regrettable... it's tragic. Good spiritual people are still the victims of discrimination and violence, based on other religions' bigotry. I believe we all look forward to the day when the ancient propaganda has been cleared up, and people are free to worship however they see fit without being demonized for it. But since there's a lot of "Wicca Information Gone Wrong" currently circulating, things like "black magic," Satanism, and demon possession often get muddled up with Wicca. Let's clear up this misinformation!

There is a belief, fostered by fiction and movies, that Witch Craft gives you the ability to do anything at all... Magick does exist. It's real, and you can learn to use it. And I must admit, it is possible to do all of those fantastic things, and more. But! Magick by itself can't do it. Only highly advanced spiritual awareness can work such miracles. And by the time you reach that level of spiritual maturity, believe me, all desire for such demonstrations of magickal power are long gone. Witch Craft can help you with a lot of things in your life. Magick can manifest just about anything you want, in time. But you won't be able to conjure up a palace out of thin air... not until you've long outgrown wanting to do so.

One of the biggest misconceptions is the relation between Wicca and Christianity. The confusion comes from the ancient prejudices preserved in the Old Testament, and a deliberate mistranslation in 16th century. According to the ancient teachings, Christianity is violently opposed to Witch Craft, and every other religion that might compete with it (which is all of them). But this is just the religious dogma. Real Christians — those who follow the teachings of Jesus as He lived them — do not have a problem with people who follow other religions. There are many rooms in God's mansion, after all. As for the infamous line, "Thou shalt not suffer a witch to live," that was a deliberate -— and very controversial — change in the wording by King James, when he made his own version of the Bible. (Exodus 22:18) The original word was "poisoner." At the time, there was a great outcry against this modification, but James was King so he won. He even ordered other versions burned, so only his would survive. Other Christians who are well-meaning may condemn Witch Craft simply because they lack real Wicca information. They rely on doctrine and confuse it with Truth. In much of Christianity, there is less information on Wicca than psychological projection of their own shadow-selves onto Witches.

But from a Wiccan perspective, such opposition to another religion is a meaningless concept. Wicca as a spiritual path is not opposed to any other path a person may choose. Religions may be intolerant. But any true spirituality is inclusive by nature. You do not need to give up any religion's "citizenship" to practice Wicca. There are Christian Wiccans and Jewish Wiccans and Buddhist Wiccans, just to name a few. (Learn more about Christianity and Wicca starting here. ) But at their essence, there is no inherent conflict between Wicca and Christianity. Any that exists is due to flaws in our human perception — our innate bias towards anything different. So in fact, it is entirely possible to be both Christian and Wiccan at the same time. One branch of Wicca is devoted to this union of spiritual beliefs. A list of Christian Wicca websites can be found by clicking here. (Opens page in new window.)

Satan is not a Wiccan deity. The Devil is a Christian construct, reflecting the fears and paranoia the Old Testament instigates against other religions. Wiccans don't acknowledge Satan as a real entity at all. By definition, therefore, Witches cannot be "devil worshippers." Insistence that this is not the case merely shows a lack of reliable Wicca information. The reason the misconceptions about Wicca and devil worship persists (besides all the malarkey spread by the Inquisition) is because Satan was modeled on pagan deities, particularly Pan. (That was done very intentionally.) And since Pan does have an honoured place in the Wiccan pantheon, Christians sometimes believe that means we worship Satan. It's a sad case of being sucked in by one's own misinformation. There is just no ground to it at all. It's believable only to those who make assumptions about Wicca without information. Of course, to fanatics of many religions, anyone of another faith is worshipping Satan. There's nothing we can say to people like that though. They are too far gone in their own self-righteousness to reach on a spiritual level.

There are Satanists out there, of course. (Ironically, this is due entirely to Christian promotion!) Satanism essentially takes the principles of spirituality and puts them through a thoroughly material filter. It is a religion of materialism. It is, in fact, a deification of the ego — the personality that we think of as "I." You could say that Satanism is a religion of misconceptions. To some extent, all paganism acknowledges the Divine within us. But Satanists take this to an extreme, stating that the only divinity is ourselves — our physical selves — and denying higher spiritual reality and values. (I find it fascinating that they are an anti-Christian religion, yet their foundation is a Christian "deity." I suppose it makes sense to them, though.)

What is generally called "Black Magic" is hostile magic: Generally only those with limited Wicca information will practice "black magic." It is incompatible with Wicca as a spiritual practice. This is not because of any moralizing, but because as one progresses spiritually it becomes obvious that you can't hurt anyone else without harming yourself first and foremost. From the most basic principles of Wicca belief, harmful magic is completely incompatible with Witch Craft. The the Wiccan Rede and the Three-Fold Law are the fundamental tenets of Witch Craft, and they both advise the wisdom of "Harming None." The Effects of Black Magic is an article that looks more at this.

(Actually, the term "black magic" is another layer of misconceptions. It implies that darkness is bad.

I believe that the real Black Magick is a positive and beautiful process. But because of the human ego's discomfort with everything hinting at death, it has been maligned for centuries.)

Some witches believe in demons, and some don't. Regardless, the phenomenon of demon possession is a curious one. In general, Witches do not consort with demons, or negative energy beings. In fact, I routinely receive questions on how to avoid that sort of thing. I don't have all the answers on demons. But this is what I believe.... I believe that those who dabble with Demonic Possession are already, unknowingly, under the influence of a demonic force. How else could they consciously engage in something that will harm them before anyone else? Talk about misconceptions!

Next Article on Wicca Information

From Christian to Wicca: What You Need To Know

How To Be A Wiccan

Difference Between Religion And Spirituality

Return from Misconceptions about Witch Craft to Wicca Information