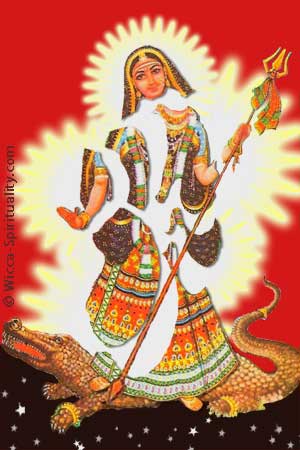 I want to introduce you to a Deity whom you may know better than you wish — Akhilandeshvari: the Goddess Never-Not-Broken. You might not have heard Her name before, because She represents the kind of things that people shy away from. She's been pushed into the cracks and crevices of life for the past few hundred years or so, but She's back! And She embodies the cataclysmic, exhilarating, transformative process that the Earth — and we individuals — are going through right now. And She holds the keys for getting through it successfully.

The Goddess Who Blesses Grief And Disaster

You may have bumped into Her occasionally hidden in the dark alleyways of life, but turned your gaze away. You've likely fallen into Her embrace once or twice: in hospitals, at work, watching the news, or in your car, but broke away as quickly as possible. She's the kind of Goddess you don't want to take home to meet your mother — She'd give your mother nightmares. But Her power is unparalleled. Pronounced ah-kee-LAN-desh-va-ree, "Akhilandeshvari" translates as "Never Not Broken." She shows us the power and opportunity of being broken into pieces by heartache, disaster, great fortune, and other life changes and traumas. However She takes this to the furthest extreme, purposefully keeping Herself broken wide open, allowing Herself to flow with every current, creating and fragmenting and recreating Herself endlessly. She steadfastly refuses to paste Herself together into a stable form, shunning the limitations that She'd have to abide and the false identities that would hide Reality. She rides on a crocodile: the very survival-fear that keep most of us chained to the known and routine is Her flying carpet! She is not controlled by the need to keep her identity consistent, or even alive. She dances and spins and breaks herself into shards of light, tossing out new possibilities for herself like flower petals from a cherry tree. The Goddess Never-Not-Broken promises that the greatest magick is in the transformative moments: the heartbreack, the uncertainties, the pause before we hit the ground... and what we do with ourselves after we land. She is the Goddess of Surrendering to Change, and we are getting to know Her well these days.

Hiding From Her Blessings

If you met this Goddess on the street, your heart would pound and you'd break into a cold sweat: "What's coming for me now?!" It's normal to fear and resist change, but Akhilandeshvari whispers to us also of freedom — liberation from the past, from habits and wounds, from stifling routines, from everything that once was good but has become a burden or a prison. Liberation, indeed, from all the illusions of the ego. She is, in the same instant, the personification of destruction and rebirth. But not like Kali the Destroyer who levels us all with Her sword. Akhilandeshvari yields to the destruction of herself, her ego and self-identity, so that She can remain in contact with Truth — the Divine Source that is manifesting Itself as one individual. Akhilandeshvari is a Goddess that has fully come into Her own now, as we and the Earth and all the systems we have built over the millennia are crumpling like old newspaper.
Find out more about Her in Akhilandeshvari: Symbols and Surprises, and Matron Goddess of the 2012 Transition. You can also read Julie (JC) Peters' article which brought Akhilandeshvari to my awareness. And Jamie K. Reaser has a wonderful poem about Her as well.

Next Article: Hecate, Goddess of Witches

Invoking Quan Yin and Tara To Increase Patience and Compassion

Return from to Wiccan Gods and Goddesses