What Is The Difference Between
Religion And Spirituality? 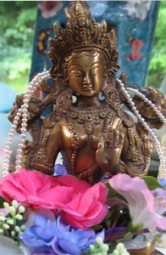 The Main Difference Between Religion And Spirituality

The Purpose of Religion

Religion is geared to provide answers to the deep questions about life and death — ALL the answers. It has also been geared to stifle questions. After all, if everything has been answered, there's nothing left to question, right? Originally, religion was created by people who wanted to pursue spiritual evolution. It is meant to point the way to enlightenment, that is, union with the Divine. The trick is, you can't understand — let alone explain — enlightenment unless you've been there yourself. So religion tried to explain spirituality, without understanding the crucial bits! What we're left with, after you remove all the important bits of spirituality, is religion. Religion is an attempt to point the way to spirituality.

Unfortunately, this doppelganger was mistaken for the authority article, thus becoming like the evil twin of spirituality. And nothing good can come of devotion to a fraud. This is why they say, "If you see the Buddha on the road, kill him." Because the Buddha you can see and understand is NOT the real Buddha. The true Buddha lives inside of each of us. That is . . . the Divine is within you, not outside of you. This is where religion has gone wrong. It has mistaken the image for the truth. This is like going to a restaurant and eating the picture of pasta rather than the real thing. When Moses raged against the worshipping of idols, this is what he was talking about. Religious people commonly mistake their idea of God for the actual God. This is a complex issue. But we could sum it up as: we paint a face on the All, and then forget the All and worship the face. Thus a gulf is created between those who pursue spirituality (the All) and those who follow a religion (one face of the All).

Religion eventually comes into direct opposition to spirituality. Such conflict is inevitable. If you tell people that their "literal word of God" is only a metaphor, their hackles are going to go up. It's a challenge to their beliefs, which feels like an attack at the very core of their self-image. Religion insists that there is only one Right And True. Spirituality knows that it's all Right And True... that there are as many paths to the Divine as there are people seeking. So spirituality can encompass religion with no distress, but it rarely happens the other way.

Religion Can Be A Container For Spirituality

For many people, religion serves as the container for their spirituality. This is the purest use of religion. For others, religion acts as a pseudo-spirituality, relieving them of the responsibility to actually live a spiritual life. Religion at its worst reinforces ego, self-righteousness, tyranny, prejudice, hatred, etc. But at its best, it can be the gateway to spiritual enlightenment.

A Witch's Definition of Enlightenment