Are There Chakras In Wicca?

Are there chakras in Wicca? Do Wiccans work with chakras? Some do, certainly. Others insist that chakras aren't Wiccan. Are they or aren't they? And why does it matter? Let's back up a bit. What exactly are chakras? 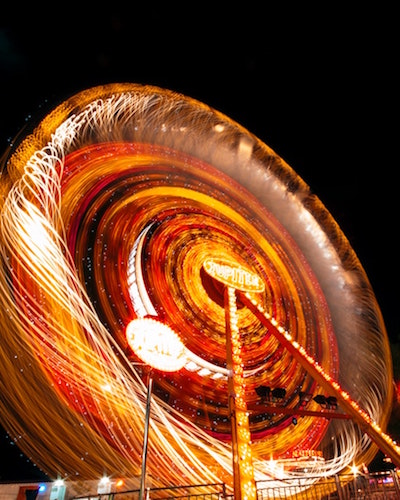 Simply put, chakras are energy vortices in the human body. I think of a chakra as a gateway between the body and the energy / spirit realm — openings to other energetic dimensions. They are constantly spinning, much like this ferris wheel in the picture. As they spin, they bring energy from Source or Soul into the body. Each one has its own character, qualities, and sphere of influence. Each one is associated with organs, glands / hormones, and systems in the body... as well as meridians (energy channels). Each one has its own unique powers. They're kinda like sockets or (more accurately) funnels, where you can plug into Divine energy and draw more of that amazing life-force into your physical body and energy body.

Chakras in Wicca — Past & Present

There is no doubt that chakras exist. We may not know exactly what they are or how they function. But we do know they're real. They have been experienced and explored for millennia in the far East. Western European peoples in history, however, seem not to have noticed chakras, as such. There's no real proof that they didn't, of course, and equally there's no evidence that they did. And since Wicca is a derivative of Western European — particularly Celtic — religion, chakras aren't something that traditional Wicca deals with. This is why some Wiccans say "There are no chakras in Wicca." Of course, that's just the dogmatic response. I like to believe that we're getting past the narrow dogmas of religion that limit what we can believe and how we should practice our spiritual paths. Dogma is so "old paradigm." Chakras do belong to the human body/soul and are real energetic forces. Like duck-billed platypuses, they exist — whether or not we've ever seen one, or found them mentioned in our sacred texts. In other words, whatever your religion, chakras are at work within you. You can choose to ignore them, or you can choose to work with them. But there's no point saying chakras aren't in Wicca, because Wiccans are alive and all living beings have chakras. Wicca Spirituality is grounded more in reality and soul than in dogma — it's what i like best about it. Why should we deny spiritual insights that come to us from other cultures? Just because our ancestors failed to notice something? So the question really is: are you practicing Wicca as a religion or as a spiritual path? Religions have dogma — what is and isn't allowable. Spirituality doesn't bother with such distinctions. In other words... Even if the idea of chakras didn't originate in Wicca or its predecessors, working with chakras is entirely valid for Wiccans. Why wouldn't we work with chakras, now that we know about them? Clear and active chakras are vital to our long-term wellbeing. Having all the chakras in balance, perhaps even moreso.

What Does It Mean For Chakras To Be Balanced?

At the risk of making this article excessively long, a brief look at "balancing chakras" is necessary. Balance can mean a couple things, depending on whether you're speaking of a single chakra or the whole set. It sometimes refers to the spin of a chakra. Chakras spin like wheels — that's actually what the word means. Can you imagine a wheel that's loose on its axis and wobbling, or a wheel that's on a bent axle and so is not perfectly "upright"? That's what an unbalanced chakra is like. In reference to the set of chakras, balance refers to the degree of openness or velocity of each chakra, in comparison with the others. In other words, do all of the chakras have the same amount of energy coming through them? Is one slower, draggy, clogged, or closed up more than others? Equally undesirable: is one faster, more open than the others? If they aren't basically equal, your chakras are out of balance.

Why Chakras Should Be Balanced

This may seem unimportant — in fact it's critical. Think of it like pouring water through a garden hose. If the hose has a kink in it, the flow of water (read: energy) is blocked there. If the hose has a hole in it, the water (again, energy) sprays out chaotically. Ok, that's not the best analogy. A better analogy for a too-open chakra is like plugging the hose into a fire hydrant and pouring a blast of water into the garden hose. You'd better have a very strong hose!! There must be a better analogy out there somewhere! But you get the idea, i hope: If some chakras are closed or opened more than others, the flow of energy is uneven, and either way this causes problems. I won't go into detail here. Suffice it to say, you don't want to mess around with either!

Okay, so we're talking about chakras in a Wiccan website. You're going to want a practice you can do for your chakras, right? I have some lovely practices that i'll be sharing in upcoming courses. Meanwhile, though, here's a handy, quick chakra clearing and charging practice for you from my upcoming book: Quick Chakra Clearing & Charging.

Return from Chakras in Wicca to Wiccan Practices