WHAT – If Anything –
Could Ascension Mean
to Wiccans??

Yesterday I used a word that I've been avoiding for years: Ascension. The Shift of Ages, the Transition, the dawning of the Spiritual Golden Age, the Satya Yuga, the Age of Aquarius... there's a lot of my writings on these topics. But suddenly, there it was, out in the world for everyone (who receives my eLOVEation emails) to see! I should NOT have dropped the A-bomb without explanation!! So this morning I asked the Goddess what the heck that was about. From that discussion, came this information:

How Did Ascension Get Into My Vocabulary?

Why have I avoided this word? As a Wiccan and a Witch, frankly I disagree with the entire premise that the Earth is lower, dirtier, more sinful, or in any way less sacred and glorious a place to be than the Spirit realm. Wouldn't you agree? Some religions take the entire process of living in a body to be merely a distasteful chore to be escaped from as quickly as possible. "Ascension" seems bound to this Earth-negating philosophy, which is why I've always felt uncomfortable with it. And then yesterday, in my brand-new email service, I dropped the A-bomb and left it sitting there, waiting to explode.
<
Well, it was a very minor explosion, but a good reminder. Wicca is about grounding spirit on the Earth. So, what did the Goddess slip into my awareness yesterday that suddenly made "Ascension" the right word? 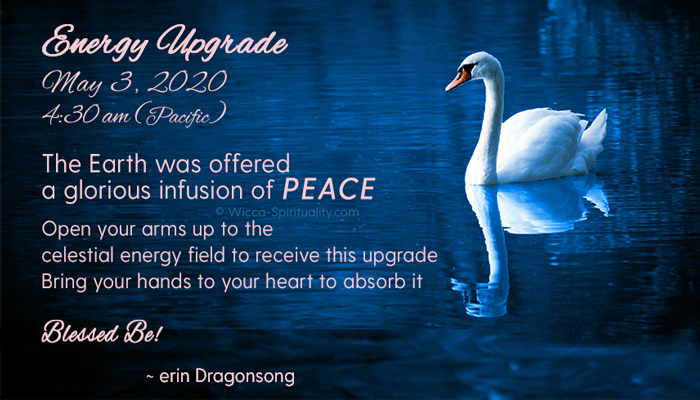 When I felt that tsunami of Peace enter the world's energy field on May 3, 2020, it was like a weight had been lifted. The world felt, literally and symbolically, lighter. For the first time, I got a very visceral sense of how Ascension could mean simply a refinement of the vibrational field... from a heavier, denser vibration to a lighter, swifter frequency. I got a sense of what Ascension would look like in a physical incarnation. Rather than being a way out of the world, I saw that it was a process of clearing the planetary energy field to a level where more Divine Qualities can be lived out in physical form.

Someone emailed and asked, What about the less-pleasant emotions? Sadness, grief, anger... all the feelings that have been associated and buried with the Shadow. Am I dismissing them, dishonouring them? She wanted to remind me that it's not only the pleasant feelings that are valid, and that we need to have scope for the full range of feelings. Absolutely true!

Elevating All Our Emotions

As soon as we start locking down or blocking out any emotion that we might have difficulty with, we close down the connection to the Divine. Granted, sometimes we may need to slow down, pause, or drip-feed a difficult emotion... but we do need to feel it, honour it, and let it move through us in some way. However, that's not where we want to stay. It's not that there's anything bad about those feelings, but we're not meant to feed misery and stay in such dense energies forever. Someday, probably (hopefully) soon, it will seem ridiculous that I have to explain that. But we're not there yet. And there's a lot of confusion about this in spiritual circles. There are so many people committed to Love and Light, but spiritually bypassing their truth, their Shadow, to be there. This isn't sustainable, and it's not the point.

We can't uplift the world by cutting away the parts of ourselves that are challenging. That's been the mistake of the past several millennia. The Goddess was challenging — flux, chaos, the Void, Nature, being in bodies... all these aspects of the Feminine were challenging. The Heart was challenging. The Soul was challenging. Women were challenging. So we tried to cut them out of humanity. We chopped them up, and built our world on the pieces, just as our most ancient myths describe the murder of the Mother of the Gods. Well, we can see where that gets us! The entire known history of humanity has been an experiment in living completely from mind and ego. We've taken that experiment to its furthest possible limit. And what we've discovered is that not only is a world without Heart / Goddess not worth living in... it's literally not livable. The world has a very short expiration date, unless we bring these Divine Qualities back, fast.

Bringing back the Divine-Feminine Qualities associated with the Heart has always appeared to me as the Rebirth or the Return of the Goddess. Only yesterday, it came through that this is now what is meant by "Ascension." Other people may assume that Ascension means we'll be leaving the planet and our physical bodies, but I understand it in a new way now. It means being of incredibly refined,
light, high vibration
while being embodied on the Earth. That is, in fact, the whole point! That is what the Spiritual Golden Age is about. Imagine a world where all people are living from Divine Values such as love, compassion, kindness, responsibility, authenticity, and so on... qualities that Wicca and other shamanic paths well know. Imagine a world where people are allowed all their feelings, recognising the power and holiness of the Sacred Dark and the Earth-path, which Wicca and other shamanic paths know better than any other philosophy. This is what I see as Heaven On Earth. Completely literally. I wish this article were shorter, because I'd love to share with you something from a channelled book that came through last year, about this. I guess it'll have to wait.

Wicca Will Lead Us

For now, please bear with me as I may use terms and ideas that seem outside the scope of what Wiccan has been. As I told my email "conscience" this morning, my purpose is simply to present to the world, as clearly as possible, whatever the Goddess gives me. That means, I don't think about how to fit it to a certain audience or what people will think about it. That would mean distorting Her message. I just tell it as I've received it. Also, my whole purpose as a Wiccan teacher seems to be opening Wicca to be more than it had been... more of a practice for humanity's spiritual evolution than a religion. Religions have dogma that must be obeyed, beliefs that must be followed. But religions are dying with the Kali Yuga, which is the only time — the only reason — they could exist in the first place. We are entering into a truly spiritual age. Dogma, rites, canon... these must be left behind as we evolve into what we are destined to be. Wicca is a perfect vehicle to carry us
into the coming age of embodied spirituality,
because that's what it's always been about (At least to me). That's what the Goddess is giving me to share, so it may challenge us all — including me! — from time to time. But I sincerely hope you will stay with the expansion. Intuition suggests it's going to lead us somewhere greater than we could ever imagine.

Return to The Shift of Ages