Instinct and Intuition:
What's the Difference?

It seems people use the words instinct and intuition interchangeably, these days. But they're not at all the same. Here's a little story that makes the difference clear... 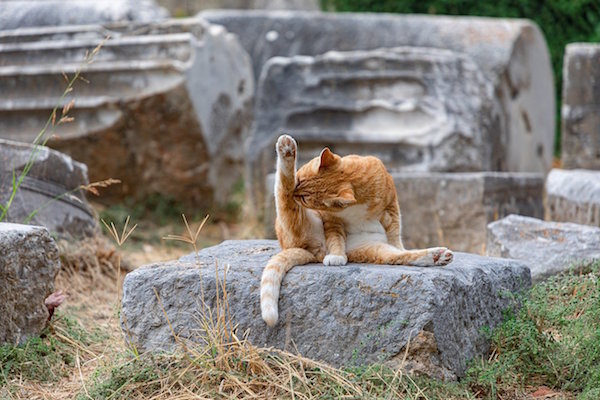 The other day, my cat (this ^ is not him) was bathing himself, when i noticed, with a start of alarm: a thorny twig in his fur. If you've ever seen a cat's bath, you know that they lick or chew off any offending material and then swallow it. They never just pull it off and drop it on the ground. Instinct tells a cat to lick and ingest anything in their fur. When this "anything" is a twig of thorns, that's not a productive instinct! The cat, however, has no choice. Instinct governs him. I considered this, as i gave my boy a little help and removed the twig myself (despite his taking offense to the intrusion). That's the crux of instinct — there's no overriding it... not without sentience to pause and consider whether that's really what you want to do. And even then, it generally gets the better of us. It's only after the fact that we realize we did something by instinct rather than by choice.

Intuition is something else entirely. It's a subtle nudge in a certain direction... one that's all too easy to miss, or ignore. Where instinct shouts commands
Intuition quietly whispers suggestions And the two can be completely at odds! For example, if my cat had intuition (not saying he doesn't), it might be a quiet thought inside his furry little head that said something like this... "Hmmm... i have an odd feeling that maybe this one time i shouldn't try to get rid of this thing myself. I should take it to erin. She'll do it for me... she's putty in my paws!" (He's right about that!) He could then choose whether to follow that slight hint, or get bowled over by the river of instinct telling him, "No... eat it! Eat it!"

That's another difference between instinct and intuition — Instinct makes logical sense. Instinct tells your body to run when a tiger is chasing you... even before your brain has a chance to think about it. Your brain is likely to agree 100%, though, if you stopped to ask it. Or if you want to mate with another person (another instinct), your brain is likely to enthusiastically come up with reasons why that's a good idea... unless your ethics say otherwise. And often, even then! Intuition often doesn't make sense — not rationally at any rate. In fact, it often seems counter to common sense. Intuition is the voice that tells you to turn left today, when every day you always turn right. Why? There's no logical justification behind it. (This is what makes intuition so tricky to learn!) When you stop to ask your brain, instead of agreeing, it's likely to scoff and tell you to do the "smart" or expected thing, and ignore those crazy impulses. The brain can't intellectually understand intuition's prompts, but it completely understands instinct's rules.

So What's the Difference Between Instinct and Intuition?

If i had to sum it up briefly, i would explain it like this... Instinct is the body's
inherited genetic wisdom
taking control Intuition is the soul's
gentle offer
of guidance The two are literally worlds apart. Instinct may protect the body, but sometimes it actually puts it in more danger... think of a horse running into a burning barn. Or a cat eating a thorny twig. Intuition cares more about the soul's purpose than the comfort, ease, or security that the body craves. In the long run, though, that's far safer.

Return from What's the Difference Between Instinct and Intuition? to Divination